A little bit about Don Bonner

Born in Victoria BC,  first 9 years lived in Nova Scotia and then moved back to Nanaimo in 1967.  Attended Quarterway, Woodlands and NDSS and later at the University of Guelph. 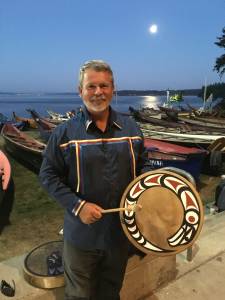 Wearing traditional ribbon shirt while getting ready to do protocol in Suquamish Nation during Tribal Journeys.

I’m a proud voting member of the Algonquin Nation.

Business owner with NISA for 27 years.  NISA is the oldest Internet based company in Nanaimo and the only one to remain in business since the start of commercial activity on the Internet.  This is because we planned for the future changes we saw happening in the industry and evolved our business plans to accommodate those changes. NISA has developed strong relationships with our clients and continues to this day.

My most recent business adventure is starting up WaveMaker Press.  An indigenous owned publishing company that specializes in Indigenous Children’s Stories. We recently published our third Children’s book.  We are a “Born Accessible” publisher which means we publish our books to be read by anyone with any reading disability.  Including ePub, Large print format and coming soon Braille.

Married for 13 years to Beverley and we have 5 children and 6 grandchildren.

Positive change done in my community

Some things I like to do in my spare time.

I like to work on my Bonsai collection, make Native American Flutes, jewelry, leather Rattles and Drums.  I also work with my tractor on a local farm, paddle with my canoe family, drum and sing.

Working Together for a Better Nanaimo

If you would like to donate to my campaign please send an e-transfer to beverley@bonner.ca.
It’s an auto deposit so you don’t need a password however we do need to know who you are for reporting to Elections BC